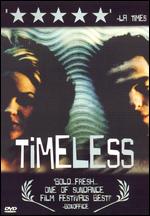 TIMELESS
Terry (Peter Byrne, earnest if a little blank) is a young petty criminal hawking stolen VCRs in Queens. He’s been resisting the temptation to move up the underworld ladder, when he meets young prostitute Lyrica (Melissa Duge, looking far too model pretty) and decides he will earn enough to take her away to a respectable life in Canada. When the pair make it only as fas as Long Island, however, the inevitable stumble to tragedy ensues. Chris Hart writes, directs and edits this shoestring feature debut, and does the latter two nicely – confident and unhurried in its course, the film carries us along on the same steady stream of inevitability as it does its characters. The film is stylish, too, nicely photographed and stitches together Super 8, 16mm and 35mm stock with some sure handed optical printing that, mostly, intrigues instead of intrudes. Shame, then, that the script is so mediocre. Hart’s story isn’t timeless, it’s just old, and its musings are far too naive for the complexities that his rhythmic and technical finesse promise. (Grande 4Plex) (Hazel-Dawn Dumpert)
Share This
Back to Press
Site Design + Development phil.designs