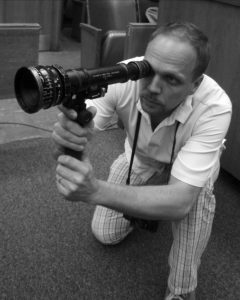 Cinematography literally runs in Christopher’s blood. His father Carl Norr is an award-winning commercial D.P. who from a very early age engendered in his son a love for the beauty of the moving image. Conscious of also instilling a work ethic, Carl had Chris loading mags by his side at the age of 13 and by the age of 18 Chris was getting paid to shoot short films. Christopher remains amazed that he makes a living doing what he loves.

His early experiences as a camera assistant landed him work on seminal films like Woody Allen’s Crimes and Misdemeanors and Rob Reiner’s When Harry Met Sally. During that time he also studied from the sidelines other directing greats like Sydney Pollack, Ron Howard, and Oliver Stone, and award-winning cinematographers such as Sven Nykvist, Giuseppe Rotunno, Bob Richardson, and Gordon Willis, but it wasn‘t long before he was at the center of the action, shooting numerous independent feature films, dozens of commercials and music videos himself and putting his learned skills to work. (Please see his resume or imdb page for a detailed list of projects.)

While Christopher is first and foremost a D.P., he continues to take advantage of all opportunities to learn more about the art form, which has included collaborations with Director Michel Gondry and D.P. Ellen Kuras on the visually experimental films Eternal Sunshine of the Spotless Mind and Be Kind Rewind as well as operating on Martin Scorsese’s Rolling Stones Shine a Light and Fran Lebowitz documentaries.

Brooklyn born and raised, Christopher still lives in the New York City borough with his family but travels frequently for both work and pleasure. Because his passion for capturing life in all its forms transcends the work place, he never leaves home without a still camera, his eyes always attuned to the kaleidoscope of subtle and not so subtle visual and graphic stories around him.