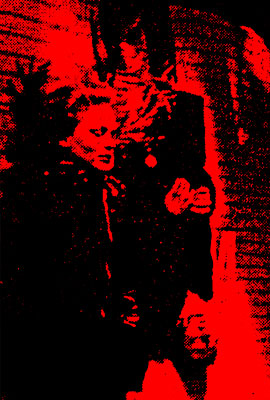 Timeless is a low-budget inventive film noir. Director/writer Chris Hart takes such palpable pleasure in the emotional effects he can create with a camera that we can’t help but catch his enthusiasm, even though his overall themes are familiar.
Narrator Terry is a young man stuck in a deep rut. stuck in the outer reaches of new york city, he lives with an alcoholic father who promptly squanders every penny Terry brings in. When Flood, one of the local tough guys, offers Terry paying employment, it’s tough to say no, even though the job involves gun-running and beating people up. Through his new profession, Terry encounters Lyrica, a pretty young prostitute who is the semi-captive mistress of Tommy, Flood’s rival on the local turf.
Terry gets starry-eyed notions of rescuing Lyrica from their grubby environs and effecting a joint escape, a quest that becomes more urgent after lyrica bashes Tommy over the head with a lamp. Meanwhile, Terry’s father continues in his bleary quest to ind his wife, who walked away years earlier.
Hart uses time-lapse photography and frame pixilation to put across the characters’ states of mind. This has the effect of making us feel that we’re inside Terry’s memories, adding a disarming intimacy to proceedings. The main characters’ predicaments are all too plausible – we have no trouble understanding how poor, fundamentally decent terry winds up in such a terrible mess. hart creates a good sense of casual chaos and desperation that infuses the lives of his people, while his slightly elliptical style provides a sense of lyricism. he also makes Terry heroic by giving him a instance, to defend Lyrica. timeless is therefore graced with a protagonist who isn’t especially brainy but is admirably self-aware enough to understand his own motivations. However, like many filmmakers working in the genre, Hart has underwritten his female lead. Lyrica has enough personality to keep the plot moving, but she lacks Terry’s sense of identity, so that their relationship can’t fully develop the emotional resonance that seems intended.
Peter Byrne gives a thoughtful, resolute performance as the troubled Terry. Melissa Duge is lovely and scrappy as the half-tough, half-victimized Lyrica. Michael Griffiths is unnervingly cool as Lyria’s brutal boyfriend and Joe Hart has shaggy, offhand affability as Terry’s dangerous but social employer. Thomas Grube captures the pathetic, sweaty misery of terry’s alcoholic, unhappy father. Cinematographer Chris Norr has created some bleakly beautiful images from potentially mundane surroundings.