By Kodak Cinema and Television
January 1, 2010 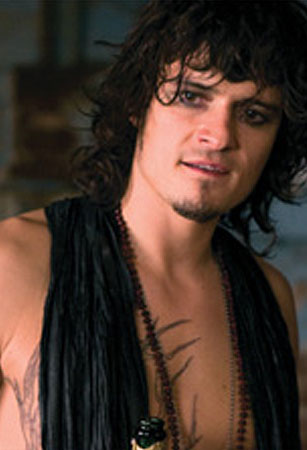 Sympathy for Delicious was directed by Mark Ruffalo, best known as an actor in films like Eternal Sunshine of the Spotless Mind, Blindness and You Can Count on Me. “The project had been planned as an HD movie,” says cinematographer Chris Norr. “While we were in prep, Mark kept saying wistfully, ‘I wish we could shoot film.’ Finally, I said to him, ‘You know, there’s no reason we can’t shoot film.’ It’s a budget choice. I knew we could shift things around and make film work.”

Norr, Ruffalo and one of the producers took a tour of Panavision, where Andy Romanoff explained the 2-perf option, which they immediately embraced.

The story concerns a wheelchair-bound homeless man who finds he can heal people, and uses that faith-healing power to become a rock star. The cast includes Ruffalo, Orlando Bloom, Juliette Lewis, Laura Linney and Christopher Thornton.
“I am into darkness,” says Norr. “For the idea of healing, I referenced paintings by Caravaggio, and I often lit with a natural, warm ray of light and lots of darkness.”

In some scenes, the filmmakers re-created Caravaggio’s compositions, placing the actors within the frame to echo the placement of the painter’s subjects in famous paintings.
Norr used older Panavision Super Speed and Ultra Prime lenses. He chose KODAK VISION2 Expression 500T 5229, 100T 5212 and 200T 5217 films. “To me, the 5229 is very painterly,” says Norr. “There is a softness, especially in dark scenes, which I really love.”

Norr says that shooting film allowed him to work more quickly. “I’m not a producer but when you account for the time saved, I can’t see 2-perf costing more than HD,” he says. “We definitely used less lighting equipment, and we shaved a few days off our shooting schedule because we were able to move so quickly.”

“The latitude of the 5229 allowed me to light by eye,” he says. “One of our main locations was a loft with a large wall of bay windows. We would shoot towards it as much as possible, pushing light through the windows as the only source of light in day scenes. With darkly painted walls, I placed exposure two stops down on the actors’ faces. The film still held lots of detail in the highlights in the windows, and an incredible amount of detail in the shadows – up to minus six stops of underexposure. I could light without any fill. This looked moody but very naturalistic. This same situation on HD would have required lots of fill light to balance the windows from clipping, and the windows still would have blown out in an unnatural way.”

“My advice to filmmakers considering 2-perf is, ‘Use it!’” says Norr. “It gives you 35mm depth of field, better lens and camera choices, and less grain. Compared to 4-perf, 2-perf will give you twice the runtime per magazine, meaning fewer re-loads. Also, 2-perf is greener, with less wasted film between the frames.”