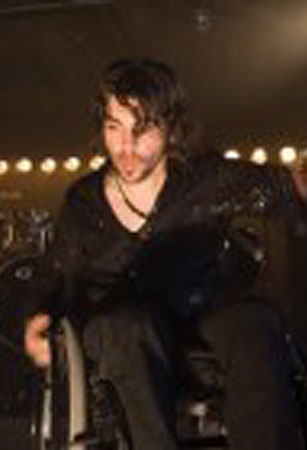 Mark Ruffalo makes a respectable directorial bow with “Sympathy for Delicious.” This tale of an embittered, wheelchair-bound DJ who discovers he has miraculous healing powers was written by and for Christopher Thornton, who himself lost full mobility in a rock-climbing accident almost two decades ago. But this offbeat effort proves more admirable for its ambition than anything else, as the uneasy mix of satire, allegory, grittiness and redemption never quite jells. Commercial placement could prove tricky for a pic likely to earn mixed critical support at best.
Once the hot, rising scratch artist Delicious D, Dean O’Dwyer (Thornton) hasn’t gotten a gig since becoming paralyzed below the waist (the circumstances aren’t explained) — club equipment is invariably set up for standing DJs only. He’s been reduced to living in his car under an overpass in L.A.’s Skid Row, seemingly without friends or family to help. One person who does want to help is Father Joe (Ruffalo), who runs a soup kitchen here and is trying to get Dean into housing.

But Dean is more concerned with kick-restarting his musical career. There’s a flicker of hope when he’s recognized by Ariel Lee (Juliette Lewis), a blowsy, tottering bassist with a serious jones for painkillers. She’s in a band, Burnt the Diplongs (Omar Rodriguez-Lopez and Cedric Bixler’s original songs actually performed by the actors), and thinks his beats and scratches would be a great addition. Unfortunately, Dean runs afoul of both incredibly arrogant lead singer The Stain (Orlando Bloom, definitely not as you’ve seen him before) and high-powered manager Nina (Laura Linney), who’s trying to get them signed. When it seems Dean might get a second chance, he discovers he’s aleready been replaced by this month’s hot new DJ.

Meanwhile, something strange has happened: Dean’s concerned hand on the forehead of a feverish homeless guy results in the man’s miraculous recovery from crippling gout and Alzheimer’s.

A nonbeliever, Dean soon finds himself deluged by others wanting to be “healed.” Indeed, he does have a mysterious gift — though to his extreme frustration, the formula “Musician, heal thyself”

doesn’t work. (He has a roughly 25% failure rate overall.)

As thrilled by this “miracle” as Dean is uneasy, Father Joe sets him up in a cheap hotel room and has him “perform” daily as the mission’s donations skyrocket. When Dean senses he’s being exploited, he bolts to perform his “trick” for cold hard cash as part of Burnt the Dipthongs’ stage show.

Naturally, the band becomes a sensation. And natch, this sellout to Mammon is going to crash ‘n’ burn fast. Only by committing a truly selfless act can Dean finally redeem himself.

There are a lot of interesting ideas in “Delicious,” but it’s hard to tell whether script, direction or both are responsible for its never quite cohering. Several plot turns are implausible–but would that have mattered if Ruffalo had struck a more fable-like tone from the start, rather than hewing to a polished, low-key naturalism? Or would the disparate elements seem disconnected no matter what? The salvational finish rings hollow, not just because it’s logistically silly (Dean is now “free,” yet in practical terms worse off than ever) but because whatever Thornton is trying to say about faith and temptation is thoroughly muddled.

Another problem is that the acclaimed mostly-stage actor-turned-writer hasn’t given himself (or just fails to exhibit) much dynamic range, as Dean goes from brooding self-pity to jerkdom to brooding self-pity before the upbeat close. Ruffalo, one of the best American screen actors of his generation, isn’t at his best in a role whose moral/psychological turns don’t always make sense.

But it’s a hilariously zonked-out Lewis who steals every scene she’s in — at least until Ariel exhibits improbable righteous disapproval toward the commercialization of Dean’s “gift.”