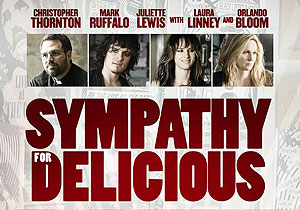 PARK CITY — The Lord’s ways are mysterious if not downright perverse in “Sympathy for Delicious,” an unusual tale of miracles and self-doubt that marks the feature-directing debut of Mark Ruffalo. Although not aimed at the conventional religious audience (its profanity and occasional images of debauchery rule that out), it is straight-faced enough about its metaphor-ready premise that marketing to secular viewers could be a challenge.

The title refers to a turntable wizard nicknamed Delicious, who has lost use of his legs and found himself homeless, living in his car under a bridge and relying on the generosity of do-gooder priest Father Joe (Ruffalo). Played by screenwriter Christopher Thornton, the character is bitter and standoffish, eager to get off the streets, but only on his own terms.

After a failed visit to a faith-healing evangelical congregation, Delicious finds that he has the power to cure disease and disability. With the touch of his hands, he cures everything from blindness to gout — but he can’t heal himself.

Ruffalo gives voice to the film’s unironic point of view: Shocked but not disbelieving, he urges Delicious to join him on Skid Row and put his God-given gift to work. Curiously, the film never wonders whether Delicious, a worldly denizen of the Los Angeles music scene, might be an unbeliever; the only crisis he faces is whether to give of himself freely or exploit his new talent for money and fame.

After teaming briefly with Joe and becoming understandably overwhelmed with the attention he draws, Delicious allows himself to be turned into a sideshow. He joins a band whose narcissistic frontman (played with vigorous pomposity by Orlando Bloom) sees the laying-of-hands as a fame-ensuring gimmick and quickly loses himself in the rock life.

The band and its milieu are drawn in such broad strokes, as an amalgam of rock-star cliches, that “Sympathy” has a hard time portraying the moral crisis Delicious faces in a realistic way. The caricatures are particularly jarring given the strong realist notes hit by other production elements, like Chris Norr’s artful cinematography.

The movie recovers somewhat as it moves back offstage, bringing Delicious’s predicament back to an effectively intimate level. Its moral point never in doubt, the film finally brings its hero to the point at which he deserves our sympathy.