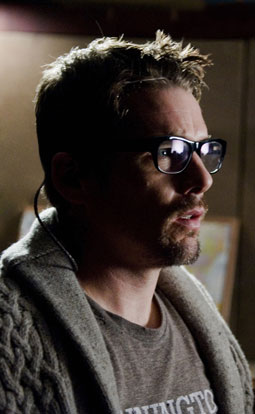 Scott Derrickson‘s previous film, the remake of The Day the Earth Stood Still, didn’t live up to the promise he showed with The Exorcism of Emily Rose, an effective tale of an exorcism gone wrong. Sinister, his newest film, serves as a reminder that Derrickson has a talent for conjuring up a creepy and dread-ridden atmosphere.

This isn’t the typical haunted house story. From the pacing to the structure, Derrickson and co-writer C. Robert Cargill deliver both the familiar and the new. The story follows Ellison (Ethan Hawke), a once-successful crime novelist. After a long bad streak of duds, he believes he’s found his next big story in a house where a family was mysteriously murdered, with the exception of the missing daughter. Once he moves his family into the house/crime scene, events don’t go exactly as planned. Considering Ellison’s sole goal is a commercial hit with this job, he faces the wrath all schills must confront: creepy kids, an angry dog and Vincent D’Onofrio.
What does Ellison do when these spooky events unfold? He mostly acts like a normal, sane person. And unlike most horror movie leads, Ellison is no hero, and he never attempts to act like one. He’s an average guy not capable of great action, a.k.a. don’t expect a big climatic battle. Ellison does and says questionable things on a personal level, but he’s a protagonist viewers can get behind and empathize with: someone trying to capture the greatness he once had to extreme lengths.

This is Ellison’s story, not his family’s. All the supernatural events only affect him, while his actions affect his wife, daughter and son. They are secondary characters who don’t have serve a great purpose, and that issues comes from one of Sinister’s strenghts. The movie paints a claustrophobic enviroment for Ellison to be in. We’re with him the whole way through in that house. It’s effective for pacing and storytelling reasons, but it also does not provide his family with much to do, story-wise.
All of the horrors Ellison faces are portrayed in a matter-of-fact style, and not in a cold or stagey way. Derrickson’s got a clear handle on the scary side of things, nearly always going for a quiet chill rather than a big, cheap jump. The horror doesn’t stem from Ellison confronting a threatening dog, but seeing the reflection of the horrific Super 8 films in his glasses, one of the many fantastic shots Derrickson and cinematographer Chris Norr capture.

I won’t spoil what’s on the films, but they feature some of the film’s finest imagery and prep the events to come. Overall, Sinister is a strong exercise in restrained horror, and one that becomes more satisfying with reflection. This isn’t a horror film which provides major catharsis, silly one-liners, or that annoyingly loud score telling the audience they should be scared. Derrickson is well-aware the imagery and ideas are scary on their own merits, so he lets all the low-key terror speak for itself.