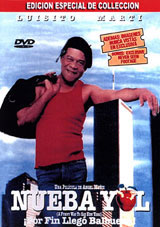 “Nueba Yol” is a green-card meller aimed directly at auds familiar with the transcultural trials it describes. Already a smash in it’s native Dominican Republic, this tale of Caribbean fortunes in New York (the title is slang for the city) may be to slight and generic for fest or arthouse sites, but it has an appealing authenticity that should ably prove the wisdom of distrib Kit parker’s decision to target Hispanic neighborhoods and media in the U.S.

Pic builds on the established presence and persona of Dominican TV star Luisito Marti, whose Balbuena character is a shambling, moon-faced, good-hearted Everyman. Disconsolate at the recent death of his wife as tale begins, Balbuena lets his handsome, fast-talking pal Fellito (Raul Carbonell) persuade him to forsake his island home and try for a new life in the gray metropolis to the north.

What follows is a catalogue of immigrants travails. Staying with his cousin’s family, Balbuena is uncomfortable at every particular of his situation, from the cold to the loneliness to the drug dealers on the sidewalk. Inevitably, he finds Fillito’s promises of money flying through the streets mite overstated. He tries to find work, only to discover that an illegal status means the worst pay and the most menial of jobs, if anything at all.

Worse still, the woman he meets who offers an emotional antidote to his woes seems like a fleeting vision. Ironically, Nancy (Caridod Ravelo) has just put in motion plan to move back to the homeland Balbuena recently left.

While these problems get resolved in rather stereotypical fashion, pic no doubt hits home for some viewers in its reflection of the immigrant’s current plight, both emotionally and in certain details like concerns of parents-such as Balbuena’s cousin- that disciplining their children even mildly could prompt a complaint to the state’s welfare agencies and child abuse charges.

Pic drastically overuses musical montages as a narrative device, but the lifting music itself integrates smoothly with the tale’s blend of drama, comedy and romance.

Assisted by Christopher Norr’s sharp lensing , helmer Angel Muniz provides a pro look as well as getting likeable and adept performances from his thesps, especially Marti, who gives Balbuena poignancy and believability. Other tech credits are fine.