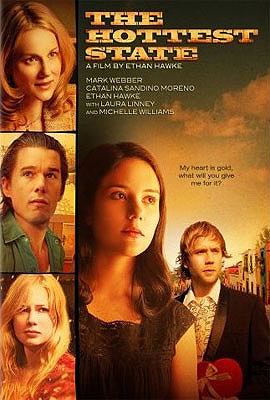 Ethan Hawke’s film, based on the novel he wrote a decade ago, should come with a warning that it may cause bruising from heavy-handed dialogue.

Disaffected 20-something actor William (Mark Webber) finds himself in rapture with singer Sarah (Catalina Sandino Moreno) as their relationship unfolds over a few short weeks. It’s over when William is away shooting a movie and Sarah’s interest inexplicably cools. The final act explores William’s heartbroken torture as he examines his relationship, himself and his past. “The Hottest State” seems better suited for the stage than a film. Granted, it’s a talkie, but the stylized conversations stray far from natural small talk. There’s also little romantic momentum as their love affair crescendos immediately and hits a plateau, where it exists as a series of redundant encounters of poetic dialogue and cute/steamy love scenes.

Since Hawke’s story appears autobiographical, it’s disappointing to have Webber portraying the lead rather than Hawke himself. In fact, the film only becomes palatable at the end, when Webber stops trying to be Hawke and dumps the snarky persona, earning his pay when the story finally calls for introspection. Interestingly enough, this happens when he acts opposite Hawke, who plays his estranged father.

Chris Norr’s cinematography adds a romantic glow to the film, and Hawke provides solid direction. Unfortunately, “The Hottest State” seems like two stories: one about a plodding, inaccessible relationship and the other about a young man finding himself. At one point, William’s mom (played by Laura Linney) tells him “the root of depression is being too self-involved.” It is unfortunate Hawke doesn’t heed her advice, because this self-important movie can’t save itself from being disheartening.