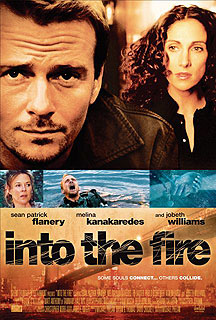 With the recent anniversary of 9/11, a ﬁlm such as “Into the Fire” seems rather appropriate, as those events ﬁgure into writer/director/producer Michael Phelan’s ﬁlm.The story deals with coming to terms with grief born out of a tragic loss (or losses in this case) and trying to move on. However, the World Trade Center angle ultimately only serves as a distant third side to this interesting, thoughtful, and unfortunately somewhat meandering triangular tale.

Walter Hartwig, Jr. (Sean Patrick Flanery) is a Lieutenant with the New York City Harbor Police. While diving for victims from a watery plane crash, Walter comes across the beautiful corpse of Sabrina Hampton (Melina Kanakaredes), becoming so mesmerized by her, he has to be pulled to safety by one of his teammates. This “breakdown” gets him hauled before a review board, but rather than try to explain himself, he quits his job. Obsessed with the woman he saw in the water (and something he took off the body), he tracks down and begins to form a tenuous connection with Sabrina’s twin sister Catrina (both roles played by Kanakaredes), who has emotionally collapsed (and shut herself in her apartment) since the death of her sibling.

The discovery of Sabrina’s body does far more than send Walter into a momentary tailspin. It also triggers long-suppressed memories of a tragedy in his own childhood, one he blames himself for, and which has colored his relationship with his father (Ron McLarty), now enfeebled and living in a nursing home, ever since.

In the midst of Walter’s anguish, he receives comfort from an unexpected source when he meets and befriends June Sickles (JoBeth Williams) and becomes a big brother to her granddaughter Quinn (Lydia Grace Jordan) whose ﬁreﬁghter father perished on 9/11.

Unfortunately, other than few in stances here and there, (such as when Walter ﬁrst comes across Sabrina’s body), one feels little more than a spectator at the events shown—removed from the action, instead of experiencing it emotionally.

A big problem is that much of Walter’s persona is rather stereotypical—a somewhat arrogant, macho guy who ﬂouts the rules and isn’t all that likeable. We never really get to see who he is inside, other than that a long-ago incident seemed to set the course for his life. As such, it’s kind of hard to care for the character; a fact which hurts the picture, since he’s on screen for close to 90 percent of the film.

Kanakaredes as Catrina is realistically vulnerable as a woman trying to put her life back together, having lost the sister she always looked up to; while Williams is nicely stoic and affable. However, since this is Walter’s story, both women are relegated to supporting roles, with neither being used as much as perhaps they could be. Also given the short shrift is Walter’s relationship to his partners on the Harbor Police. Another problem is the rather slow pacing of the ﬁlm, making its 93minute length seem to drag on too long.

Still, the core theme of the movie, By JUDD HOLLANDER the need for healing, is powerful—and the method Phelan uses to set the story in motion is intriguing—one just wishes it could have been a bit better executed.

This is also one ﬁlm where you have to pay attention to what’s going on, especially in the beginning, as Phelan goes the non-linear route, showing sequences out of chronological order, making the audience work to understand the story until it finally comes together. (A good job by editor Shawna Callahan with this.)

An overall feeling of incompleteness to the story is also a nice touch as it implies that while a healing process has begun, these characters still have a way to go before they find peace—or at least a full understanding of events.
Camera work by Christopher Norr keeps things nice and intimate, as benefits a personal film such as this.