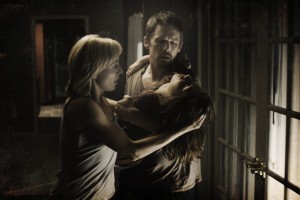 Every now and then a film comes along that every cinemagoer feels fiercely protective of, guarding its secrets as if they were gold in Ft. Knox. Earlier this year there was director Drew Goddard’s long shelved horror-comedy CABIN IN THE WOODS, and now there’s the utterly terrifying horror film from director Scott Derrickson, SINISTER. Not only will you sleep with the lights on for a week after, it will leave you absolutely chilled to the bone.

It behooves me to say that the less you know about this movie, the better your viewing will be. While I’m going to be as vague as possible in this review, I must urge you to only read reviews after seeing this film so as to not spoil your moviegoing experience.

Ellison Oswalt (Ethan Hawke) is a famous true-crime writer going through a bit of a career slump when he intentionally moves his family into a house where a brutal family murder occurred – without telling them the home’s history. Upon arrival, Ellison discovers a mysterious box containing 8mm film reels and a projector in the otherwise empty attic. As this isn’t a feel good Disney film, horrific things are contained on those home movies – one of them being an image of a lurking, menacing demon. Who or what is Ellison dealing with? And what does he/ it have to do with the murders? As you can probably guess, things go from bad to worse for the new residents as they are terrorized by spooky sounds and scary-as-fuck shenanigans.

SINISTER’s narrative is multi-layered. Not only is this a film about a family being frightened by a supernatural force, it’s also a clever metaphor for ambition letting in the demon. Ellison is desperately trying to chase down his former success, so much so that he puts his own family in harm’s way. The box represents working-parent guilt. He wants to bury these problems, but they keep haunting him. It’s powerful and works brilliantly as a relatable story. Granted, most of us will never live in a home where a people were slaughtered, but many people have to make difficult choices when it comes to family vs. career.

Smartly, SINISTER relies on atmosphere and tone to augment the story. Derrickson and co-screenwriter C. Robert Cargill strictly adhere to one of my favorite cinematic rules: Show me, don’t tell me. Eschewing cheap and easy jump scares in favor of real cerebral nightmares, audiences are subjected to indelible visuals. There’s a palpable love-letter-to-horror-cinema feeling. Cinematographer Chris Norr’s dark, de-saturated color pallete adds a polished sheen of terror to the narrative. Marc Aramian and Dane A. Davis’ sound design and Christopher Young’s electronic score complement and heighten the constant tension that builds to a spine-tingling crescendo. And massive ups to costume designer Abby O’Sullivan for putting Hawke in his ever-present gray cardigan. It makes a formidable opponent for Tom Hardy’s in LAWLESS for the cardigan of the year awards (this should be a thing).

Hawke adds depth and dimension to his tortured writer role. Ellison crumbles into a jittery, booze-addled mess during the course of the picture. As his familial problems worsen, so does that furl in his brow and his whiskey drinking. The story’s necessary tension relief comes in the form of Deputy So-And-So (James Ransone), a riff on the stereotypical horror movie sheriff. Ransone makes the role uniquely fresh and shares some witty repartee with Hawke.

Does this change the game for horror films? I sure hope so. It should serve to up the ante in favor of smart scares versus the disposable ones we’re usually given. Destined to become a genre classic, this is an intelligent and intense campfire tale. So get that fire lit and have a change of underwear handy.