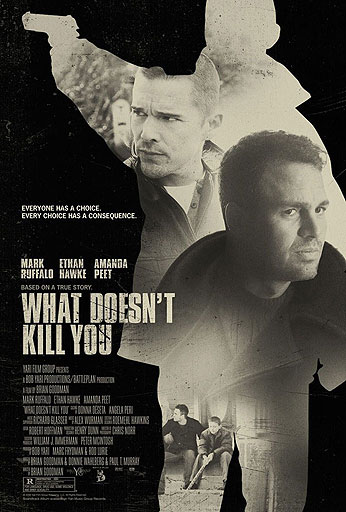 The true-life saga of a South Boston tough guy is told with assured, sensitive style by tyro-actor-turned-director Brian Goodman in “What Doesn’t Kill You.” A fine example of traditional American storytelling lined with full-bodied performances, pic is especially notable for giving Mark Ruffalo the kind of complete role this subtle, instinctive actor has long deserved yet too seldom gets. Ruffalo gets to dominate a movie that has serious notions on its mind and is blessed with a powerful sense of place. With proper handling and certain positive reviews, a solid, grown-up aud can be tapped for respectable B.O. returns.
An armored-car heist launches the film on a troubled note, suggesting inevitable death for Brian (Ruffalo) and lifelong pal Paulie (Ethan Hawke). Shifting back in time to their childhood, a few compact scenes sum up the pair’s poor upbringing, as they drift into petty crime under the firm guidance of local hood Pat (Goodman), who doesn’t suffer fools gladly.

Fifteen years on, Brian and Paulie are still stuck doing “errands” for Pat (often stealing or shaking down people for debts). Brian is married to Stacy (Amanda Peet) and raising two sons, while Paulie is living the single guy’s life. Goodman’s controlled yet expressive direction, as well as his script — co-written with Donnie Wahlberg (who also plays dogged detective on the pair’s tail) and Paul T. Murray — portray a series of episodes in Brian’s existence without ever feeling episodic. It’s a testament to the film’s exceptional grasp of the realities of daily “Southie” life and a cast that rises above the myriad cliches embedded in the material.

While Paulie is more or less the brains and impatient to break free of Pat’s grasp, Brian becomes addicted to freebase cocaine and further alienated from home life. As a clear message from Pat to stay in line — and in a brilliantly staged moment — Brian is gunned down and sent to the hospital and, after another setback, seems to be on a course to clean up his act. It’s short-lived, and after arrest for another petty theft, a stint in prison shows Pat’s influence is still felt.

Opening scene proves misleading, since this is actually a drama about a father struggling to pull himself out of a lifelong hole of his own making, rather than an inevitable clash with death. Ruffalo’s face reflects Brian’s sheer terror at how life in Southie has changed during his prison time, with the final act a well-rendered mini-drama entailing his difficulties staying straight.

As Brian’s opposite life forces, Peet and Hawke are thoroughly grounded in South Boston behavior, while Goodman renders a powerful, subdued study of a criminal vet.

Christopher Norr’s lensing surpasses any recent Hollywood attempt to visualize these tough neighborhoods as they are, aided by the smart decision to shoot mostly in snowy deep winter. Reviving the long-lost art of the theme-based score, Alex Wurman’s music is like a homer over the Green Monster.