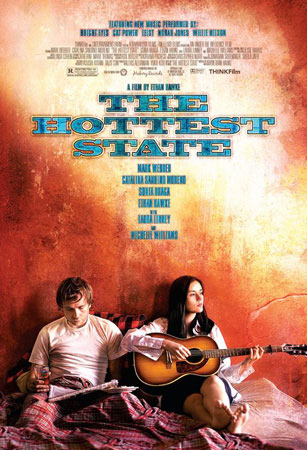 When Laura Linney turns up about an hour into “The Hottest State,” you can see the movie that might have been. She plays the lovesick hero’s mother, a woman whom a lifetime of disappointment has left imbued with bitter clarity, and Linney’s performance has the sting of a snapped towel.

“I think you’ll be astounded at how many times you’ll fall in love,” she curtly tells the kid, but he’s not listening and neither is the movie. “The Hottest State” has been written and directed by Ethan Hawke, adapting his own 1997 novel, and while it’s not the pretentious train-wreck the actor’s 2001 directorial debut, “Chelsea Walls,” was, it still gives self-indulgence a tedious name.

The subject is young love, subdivision l’amour fou, and the main character is (surprise) a rising 20-year-old actor in New York City named William (Mark Webber). Arrogant and insecure, he falls for a would-be singer named Sara (Catalina Sandino Moreno, of “Maria Full of Grace”), and the two enjoy a fragile but ecstatic period of puppy love that turns carnal by degrees.

After a blissful week of sex and romantic montages in Mexico, Sara drops William hard. Instead of bouncing, he breaks; the second half of “The Hottest State” follows the character’s deepening despair until even he realizes it’s pathetic: standing outside her apartment shouting Shakespearean soliloquies, trashing her furniture in a rage, leaving one cringe-inducing message after another on her answering machine.

Perhaps you’ve been there yourself, or perhaps you know someone who has. “The Hottest State” still doesn’t make it interesting, because Hawke has the instincts of an actor rather than a director. He wants to build atmosphere and indulge his players rather than make the tough choices necessary to shape even a loosey-goosey narrative into something that sticks. (An interesting comparison can be made here with Sean Penn, another dreadfully serious movie star whose films as director, including the upcoming “Into the Wild,” are far more fully realized.)

Without that moviemaking focus, the young stars flounder: Webber is obnoxious, Moreno just drab. Hawke, who also plays the role of William’s burned-out father down in Texas, is smart enough to have hired a good cinematographer, Chris Norr; the film looks great. He also treats the soundtrack as a tribute album to the work of the young songwriter Jesse Harris, with tremendously affecting cuts from Willie Nelson, The Black Keys, Norah Jones, Feist, and Emmylou Harris, among others.

Those songs, cresting and swooning behind all the angst, give “The Hottest State” what punch it has. Buy the CD and skip the movie, then: Hawke still hasn’t figured out the directing game, but he makes a hell of a mix tape.