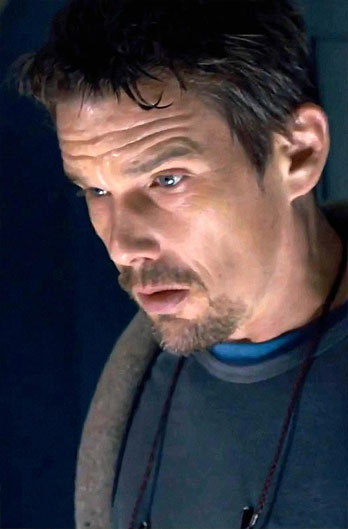 A new horror flick that somehow finds a way to make even the oldest ides fresh again is, most likely, a pretty solid horror flick — and when you’re talking about scary movies that are best described as “haunted house stories,” you damn well better find a new angle. Who the hell needs yet another generic haunted house story? Recent offerings like Paranormal Activity and Insidious have found several ways to make haunted houses seem fresh and novel again, and now the producers of those films are back with yet another low-budget, high-concept example of how, in the horror biz, sometimes the oldest ideas are the coolest ones.

Co-written and directed by Scott Derrickson (The Exorcism of Emily Rose), the surprisingly low-key and admirably intense Sinister is just a bad-ass little horror flick. It’s not a fast-paced powerhouse action-fest, nor is it a dry and dreary exercise in creaking doors and rattled minds. It’s just a slick and smart little campfire story, cleverly conceived, handsomely presented, and quietly creepy. (Derrickson’s co-writer on Sinister is C. Robert Cargill, a guy I’ve known for years, and a guy who knows his horror.) What I like most about Sinister is that the producers probably could have made it for half the cost; it’s a movie that offers creepy ideas in quiet ways, and is not interested in explosions, geysers of gore, or a big third act mayhem crescendo. It’s just old-school creepy.

Ethan Hawke (really strong here) plays a “true crime” author who has dragged his wife and two young children to the site of a horrific quadruple murder. Yes, the author actually buys the house where four people were killed so he can write a book about the killings. Oh, and he hasn’t told his wife about the house’s disturbing history. And that’s not the last mistake that the desperate but well-meaning Ellison will make regarding his new home. Toss in a local sheriff who detests the author for his own reasons, a slow-witted deputy who might not be so clueless, and a helpful yet weird college professor who deals with the occult, and you’re already halfway to a creepy movie.

Ah, but there’s also the mysterious box of film reels that Ellison finds in his attic. He moved into this house to get to the truth of the murders — and now, as he spins all five reels of horrific carnage — he’s about to get a lot more truth than he expected. Turns out there’s more going on than just one murdered family, and it’s not pretty.

Impressive in its restraint at its quieter moments, and powerfully disturbing at its nastiest, Sinister is a framework that’s old, a concept that’s new, and a darkly entertaining terror tale on the whole. Hawke’s strong performance sells the “otherworldly” material as a strong counterweight, and the lovely Juliet Rylance has some great moments of her own. Character actors like Fred Dalton Thompson (as the sheriff) and Vincent D’Onofrio (as the professor) add some color to the procedural moments, but it’s Hawke’s movie, truth be told.

Impressively shot with dark shadows and moody lighting by Chris Norr and set to a strange but effective score by Christopher Young, Sinister may not be the kind of movie to spawn another Saw or Paranormal Activity franchise, but that hardly matters to passionate horror fans. One wonders if a smart and generally quiet horror movie will find an audience these days, but if advertising can trick people into paying money for crap like The Devil Inside, it should be able to do so for quality like Sinister. This is simply a cool new idea wedged into a familiar setting, and the result is a slightly sedate but consistently creepy little horror flick that has a few new wrinkles to offer, and it does so in cool and confident fashion. I believe I already mentioned “creepy.”