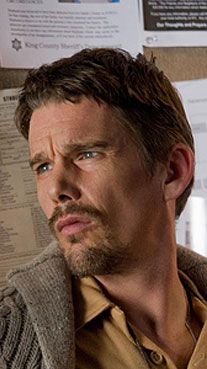 A Summit Entertainment release presented with Alliance Films in association with IM Global of a Blumhouse Prods./Automatik Entertainment/Possessed Pictures production. Produced by Jason Blum, Brian Kavanaugh-Jones. Executive producers, Scott Derrickson, Charles Layton. Directed by Scott Derrickson. Screenplay, Derrickson, C. Robert Cargill.
With: Ethan Hawke, Vincent D’Onofrio, James Ransone, Fred Dalton Thompson, Clare Foley, Juliet Rylance, Michael Hall D’Addario, Victoria Leigh, Nicholas King.
Caveat emptor barely covers the fresh warning “Sinister” supplies in an already cautious real-estate market: Don’t buy a house where the previous family was hanged, drowned, incinerated or otherwise murdered, unless you care to meet a similar fate. Ethan Hawke plays a desperate true-crime writer whose investigations into a shocking small-town death uncover a series of similar cases, suggesting his own family could be next. The scares are not just intense but unyielding in this compelling horror yarn from “The Exorcism of Emily Rose” director Scott Derrickson, which sneak-screened at SXSW seven months ahead of its Oct. 5 release.
Law enforcement doesn’t like Ellison Oswald (Hawke), who has made a career of exposing their mistakes on high-profile cases. But it’s been more than a decade since he’s had a hit book, and as the writer’s realization that he may be a one-hit wonder settles in, his methods become more desperate.

“Sinister” opens with an 8mm snuff film depicting a scene most auds would rather never see: A mom, a dad and two kids stand beneath a tree, tied by noose to a branch that snaps up, lifting them all into the air where they thrash to their deaths. With no suspects, the local police got nowhere in their attempt to explain the murders; nor were they able to find the family’s third child, Stephanie (Victoria Leigh).

Ellison aims to solve the mystery, allowing the film to operate in heavy-exposition mode for much of its running time, goosing the investigation every now and then with hints that he’s getting help from whoever made that sinister homemovie. In contrast with previous cases, in which Ellison moved his family into a house down the street from past crimes, this time, he actually bought the victims’ home, empty except for a single box in the attic that contains five old film canisters, each more nightmarish than the last.

While his supportive wife (Juliet Rylance) and two kids uneasily adjust to their new life, Ellison cracks open the whisky and fires up the projector. As if the deaths captured on film aren’t upsetting enough, other clues reveal themselves in his obsessive research — details that suggest a supernatural force may be at play. Through it all, one message is clear: Ellison needs to get his family out of that house.

In concept, “Sinister” offers yet another twist on the found-footage device so popular among horror pics these days, but instead of using that setup to throw production value out the window, Derrickson and co-writer C. Robert Cargill (an Ain’t It Cool News reporter who pitched the helmer his concept) favor the classical chiller approach. Blending darkly atmospheric widescreen lensing by Chris Norr (who also shot Hawke’s “The Hottest State”) with bump-in-the-night sound design from Dane A. Davis, the crew transforms the Oswald’s new house into a claustrophobic, crazy-making space.

Except within the gritty homemovies, which implicate both Ellison and the audience in their unflinching voyeurism, the camera hangs close to Hawke’s increasingly agonized face, capturing Ellison’s deteriorating state of mind with a relish that recalls “The Shining.” Though the film isn’t the type to distract with in-jokes and references, the appearance of an ax in the final reel can’t be accidental. Unlike Kubrick’s classic, however, “Sinister” gives its writer-hero an enviably stable wife, one capable of politely reminding her legacy-obsessed husband that his kids should take precedence over his work.

As the disturbances intensify, Ellison becomes convinced that some sort of figure can be seen lurking in each of the films, a menacing painted-face personage with white skin and black triangle eyes. He consults a local occult specialist (Vincent D’Onofrio, literally Skyping it in), who spins tales of an ancient “eater of children,” cementing “Sinister’s” status as the sort of tale that would paralyze kids’ psyches, rendered from the anxious perspective of a parent torn over whether to serve as provider or protector.