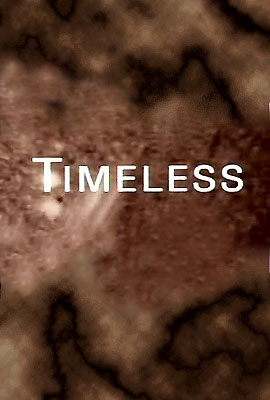 REVIEW: The micro budget ‘Timeless’ gets energy from film tricks that underscore its emotional base.

The current moviemaxing taste for mixed film stocks, altered film speeds and other visual stunts that have cracked even Bollywood’s most conventional precinct are put to extreme but good use in “TImeless”, a shoestring independent feature whose resourceful cinematography goes a long way to enlivening a routine story – and wrangling some emotional punch from it, too.
The first feature from writer-director Chris Hart, the movie follows the familiar pathway worn by lovers on the run. Terry (Peter Byrne) has been leading a hand-to-mouth existence, putting over small scams with his friend Flood (Joe Hart, the movie’s co-producer and it’s best performer, a real natural – and Chris’ brother).
He lives at home with his alcoholic father, who has the maddening habit of taking the few bucks Terry gives him and handing them over to a crooked private eye who pretends to be searching for Terry’s mom, who’s been missing for several years. Into this depressed scene comes Lyrica (Melissa Duge), a 20-something beauty whose hard life has been getting something of a rough respite since she’s become the girlfriend of Tommy (Michael Griffiths). While Terry has only fed at the fringes of criminality, Tommy’s the real deal, a truly tough character easily given over to violence, sometimes against Lyrica.
It doesn’t take long for Terry and Lyrica to recognize each other as soul mates, and soon enough, they concoct a plot to grab some cash and hit the road. As they tend to do, their plans go awry, and the two don’t make it any further than the lonely seascape of long Island beaches, deserted in what looks like early winter months.
Again, this is pretty routine material, but Hart and his cinematographer, Chris Norr, use their ingenuity to direct attention away from the metronomic narrative and toward the emotions that underline them. the use of stills, which can play out over an entire transition sequence, also lends the movie an atmosphere of romantic grittiness that helps give the movie an unusually wistful feel.
In the end, “Timeless” plays more like a riff on an old theme than a completely new treatment. But Hart and his collaborators show real talent and a gift for invention that not only elevate moments of this film, but also offer much promise.

‘Timeless’
• Stars: Peter Byrne, Melissa Duge, Michael Griffiths
• Behind the scenes: Written and directed by Chris Hart, Produced by Patricia Bice
• Playing: Opens today at the Edwards South Coast Village in Costa Mesa
• Rating: No rating; language, some violence
• Grade: B
• Running time: 1 hour, 27 minutes
• You might like it if: You like films with unusual cinematography